Get fresh music recommendations delivered to your inbox every Friday.
We've updated our Terms of Use. You can review the changes here.

by Enemy From Space 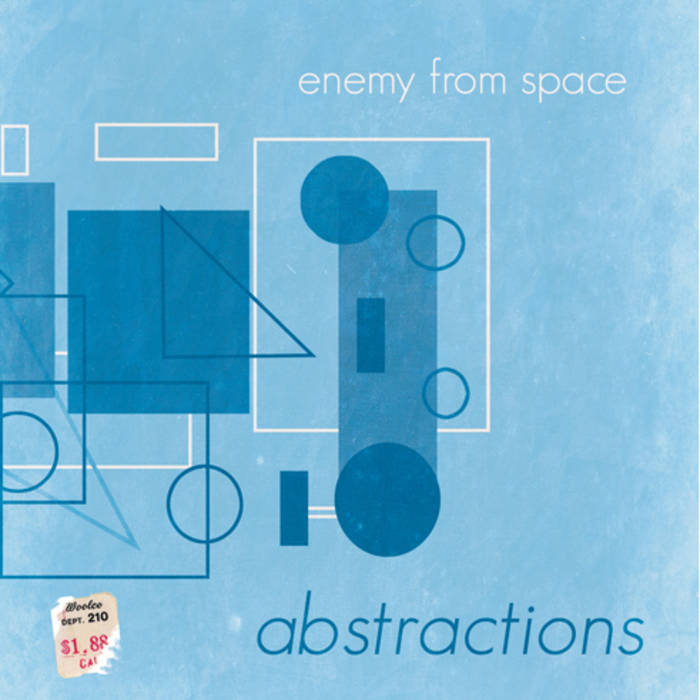 You hold in your hands the newly remastered edition of Enemy From Space's debut release Abstractions. Up until recently, it was believed that this album first came to light in 2002, presented in the compact disc format by the Imperial Fuzz recording company. In 2012, through the diligence of discographer and 10 o'clock scholar Sigmund Owusu, a vinyl LP copy of these recordings was discovered in a Fairborn, Ohio thrift store. This record, on the Baldsky label, has a pressing date of 1959.

Baldsky, a subsidiary of Vasili Records, was named after label owner Freddy Baldmore and his accountant Sal Odsky. A small Cincinnati-based company with alleged mob ties, Vasili was mostly known for knock offs of popular releases, distributed through five-and-dime stores across the Midwest. Abstractions seems to have been the initial release in a planned line of Hi-Fi Sci-Fi Recordings, advertised as "the Sonic Harbinger of Tomorrow," though no other records in this series have surfaced.

The discovery of this previously unknown recording is further complicated by records indicating that the Enemy From Space had not yet been born when it was originally released. This does tie neatly with my own theories that the EFS does not exist in the space-time continuum normally experienced by terrestrial aboriginals such as you and I. It may also explain the cover story from the 1935 issues of pulp science fiction magazine Weird Spicy titled “Enemy From Space Conquers the Universe,” in which an unknown composer named Enemy From Space unveils his "music from the future." A riot erupts at the premiere of his ballet "The Sprite of Ring," and the EFS and Karlheinz Stockhausen come to blows, only to later team up and defeat the Underwater Menace from the Beyond.

In fact, Imperial Fuzz magnate Steve Libbey has used these points as part of his defense against the Baldmore estate in the recent court case. According to Libbey, a trained science fiction author, the Enemy From Space's faster than light travel is experienced by Earthers as backwards movement through linear time. Therefore, the 2002 CD was the true initial release of Abstractions and the EFS had violated his contract with Imperial Fuzz by re-releasing the album in the past. This is not the first time Libbey has had run ins with Baldsky-- he is currently under investigation for sending a robot assassin to the year 1915 in order to kill Freddy Baldmore's father before he sired the record executive. The robot then fell in love with a primitive computing machine and paradoxically became its own grandfather.

Quantum Parapsychologist Anton Dubay attempted to explain the EFS's trans-dimensional movements in the following way: It is analogous to the relation of Leibniz's monads, only messier. This recalls one of Libbey's first encounters with the Enemy From Space. When asked the secret of anti-gravity, the EFS replied, "Instead of trying to square the circle, one must circle a square and work backwards."

Kyle Leshan, Cheif UFOlogist at the Institute of Space

"Let us not fool ourselves: The war between Earth and an invading enemy from space, using weapons strange to us, is already on and must be met right away."
-- Wilhelm Reich

Bandcamp Daily  your guide to the world of Bandcamp

The Hammer and The Relentless from the Boston band Malleus stop by for a chat.